September 6th was Faceparty’s Festival of Dreams and first birthday - no ordinary party - and James Weston had the honour of being the first to play at the festival in the VIP Heaven area.  James arrived just before his prestigious opening set wading through a crowd of peeps already eager to get into the members-only event and party into the night. 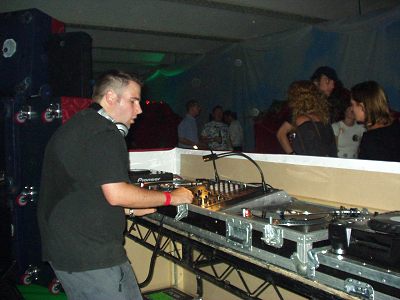 As the gates of the Old Billingsgate Market opened, James began playing a wonderful ‘string & bass’ number, very suiting to his heavenly surroundings and what's more is his sound was being broadcast to two other areas, Sonofa Beach and the Ice Bar.  “It was quite weird,” James reflects, “even though I couldn’t see people at first I could imagine them walking through the gates awestruck by the decor as they entered the beach, and I had the task of creating a perfect soundtrack for them, to match!”

Beach huts amid palm trees, four-poster beds through a heart-shaped gateway on a stairway to VIP Heaven, a chill-out room literally made of ice, Chandeliers and meat-hooks at a fetish themed Rock stage.  Break-beat, House, Drum & Bass, Trance, Rock, Ska, Cabaret...  Words barely describe all that was on offer at the Festival of Dreams as 7,000 party-goers had all night to just about explore every nook and cranny.

Mixmag commented on last year's Launch Party saying it was “the best production we've ever seen!”  This year the Editor exclaimed “I'm Totally Blown Away!”

James span to three areas, roughly half the party, for 1½ hours.  Faceparty’s Festival of Dreams has been James’ biggest audience to date with exposure to a fine and discerning cosmopolitan crowd; James Weston went down a treat!  The party continues though, at faceparty.com!