Chart
It's been quite a busy couple of months for me but I was really excited when putting my chart together because I feel the music and my style is pretty strong at the moment, especially with some of the tasty upfront promos I'm being sent.  Thanks ;)  Topping my chart is a new Mystery Jets remix from Foamo which has been getting some great reactions.  Check out the rest of my November chart where you can listen to and download any that are released.

Mix
Secondly, I've got a new feature to show off on my website; it's a Flash player for my mixes!  However, whereas I've been meaning to sort out a Flash player for a while, and had one lined up, I discovered a new social/web2.0/app (you know the deal) tool thing for sharing music, specifically targeted at artists and DJs; it's portable, free of nasty ads and time limits, and damn sexy—but then I'm a geeky web designer so I would say that!  Put simply, if YouTube is to videos as Flickr is to photos, then SoundCloud is definitely the site for audio.  I haven't got a November mix just yet, but instead a mix from last month's closing set at Simple pres. Filthy Dukes new on my website, and it's very lively indeed.  Go check out my October mix now. 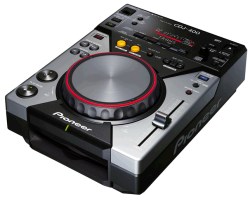 Tools
One more thing, I've just bought myself a Pioneer CDJ-400 which I'm really excited about.  It's a new CD player from the de facto industry standard manufacturer which draws influences from its entire range.  It's a smaller form factor so some DJs may be put off by it's smaller jog/scratch wheel, however its feature-set rivals the CDJ-1000MK3 for the difference in price in my humble opinion, not least because it has a port to accept music files from any USB mass storage device, and it can send MIDI data back to your computer for controlling DJ and/or production software, doubling up as an external soundcard too.  Believe it or not, up to now I've only had one CDJ-100S which means the only real opportunity I've had to practise my skills has been in the club itself!  Hence no studio mixes since 2005 when I fell into the downloads bandwagon and my 1210s started collecting dust :'(  I've toyed with producing some studio mixes in Ableton Live but it can take the fun out of actually jockeying discs and certainly removes the human touch.  The plan is to stay hands-on, having grown up on vinyl and all that ;)