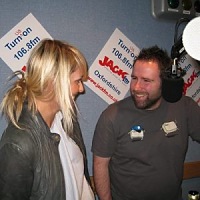 I've found some time to compile a chart for the beginning of the year and I've teamed up with TrackItDown so you can listen to and download the tracks—those that are available anyway!  Among my top 15 you'll find productions/remixes from the likes of Erol Alkan, Hervé, Lee Mortimer, Mowgli, Bot (Crookers), Riva Starr, Switch, Jack Beats, The Bulgarian and Diplo.  And then there's a few extra 'off-genre' tracks that are tickling my ears at the mo' too.  Go check out my January / February chart now...

At the beginning of February I popped into Slide Show, a relatively new radio show on Oxford's FM107.9, to promote Inland Knights at Simple.  I suppose I'm mostly known for rinsing out the heavy, fidgety, techy stuff, but I do like to take it down a level sometimes, particularly when I'm doing a warm-up slot.  So no prizes for guessing that the mix features a lot of Inland Knights remixes and productions.  There's also a bit of chat at the beginning..!  Go have a listen to my Inland Knights showcase now...