James Weston is a DJ who plays the spectrum of fresh house
to techno for dance parties by Simple in Oxford, mostly. 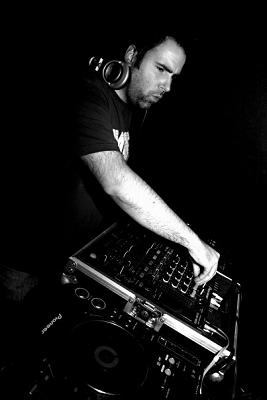 James Weston is a DJ.  Things started with an enthusiasm for rave keys and synths (okay, happy hardcore), circa '92/3.  The Prodigy Experience dropped, a wide-eyed trip to an 'under-age rave' was made, and then upon hearing his first Sasha Essential Mix in '95 the course was set.  Clubbing, gigging and with turntables by '96, James was amassing vinyl in crate quantities (yep) ready for Leicester uni, which saw his first 'stage' gig (no-one danced).  Thinking about a path to success James participated in several competitions, one of which got him a personal call from Yousef to play a set at Circus in Liverpool (tick!).  In 2003/4 James had discovered Cowley Road in Oxford and it wasn't long before he got his first gig at Simple following a mix he gave Nick Gladwin.  Having no crowd to bring to the table it was through sheer perseverance (dancing, loitering and helping at every event since), not to mention the odd radio and festival performance, that James has become an integral part of the Simple family where he gets his fix, in the mix, warming up for all colours of dance music legend.  Today James versatilely plays the spectrum of house to techno, using a unique exhaustive method for researching and buying (yes, kids) new music, all with a distinctive jackin' tinge for good measure.  "It's a body thing," Eddie Amador reliably informs us.

(and somewhat 20-something earnest - it's overdue for a review)

James Weston has always had an ear for music; sounds literally excite him!  But it wasn’t until he really felt the atmosphere that he discovered the energy & expression within him; it wasn’t until he started experimenting with dance music as a disc jockey that he realised he wanted to entertain and share...

Right from listening to his first bootlegged Fantazia mix-tape in the early nineties, James was extremely curious to know what it would be like to be part of this Rave culture (soon to rocket out of proportion and into the mainstream); either to be part of the crowd, or even unlikely he thought, a DJ!  At the very least he just wanted to be part of this unique atmosphere that had him longing for more and more.  Around the same time, a group of individuals known as The Prodigy surfaced, adding fuel to James’s fire.

One summer night in 1995, James couldn’t believe his ears.  He’d recorded an episode of the Essential Mix on BBC Radio One and there was this fantastic music ringing around his phone-hugged head.  Sasha was the DJ, and his track selection and technique were to inspire James to move forward with his fantasy and turn it into a kind of reality.  The opening track of Sasha’s live Birmingham Que Club set (28th May) was by an artist unknown to James at the time, BT (Brian Transeau); Its title, Tripping the Light Fantastic, didn’t come close to describing how James was reacting to this tune.  So... James had discovered House Music and a new ‘male obsession’ in him was born!

Much of James’s attention during and after ’95 was drawn to the various flourishing dance music programmes.  One in particular regularly pleased his ears; Pete Tong’s Essential Selection on BBC Radio One (which he now listens to just about every Friday).  In a short space of time James had started a small dance music collection on CD.  At private house parties and gatherings of friends, James was (and still is!) eager to be the controller of music.  He could only describe this compulsion as a subconscious desire to create a lively atmosphere and see people enjoy themselves by something he’d somehow crafted - he was certainly keen to develop this passion further.  So, armed with a primitive computer program, he noted down the BPM ratings of each track on each CD in his collection.  Then, matching identical BPM’s, he took his portable CD player, hooked it up to his HiFi system with a hurried purchase of cables from a local Tandy store, and proceeded to experiment by overlapping BPM-matched tunes.  James was fascinated by the result, it had actually worked!  Without too many clashing keys or galloping beats, James had mixed two tunes (albeit designed for such a task) over each other!  A small step you might say, but one that sparked fires of imagination in James that would propel him forward.

In a short space of time James became the master of his makeshift set-up.  He created many a mix-tape for his friends and even took the cable-cluttered contraption to a party or few.  It soon became clear to him however that this set-up wouldn’t suffice, especially since it was also clear from his friends’ remarks that he was getting very good at what he did!  Searching around for a good deal, James made the choice of vinyl over the approaching CD trend - probably through scratch appeal - and finally treated himself to a pair of Kam belt-drive turntables.  Just as his A-levels passed, James started his vinyl collection.  Now one of the most popular mainstream dance tracks of all time, Armand van Helden’s remix of Tori Amos’s Professional Widow was an extremely exciting purchase for James; especially so since he’d just danced his arse off to Carl Cox banging the very same tune out plus-8 at BCM in Magaluf that summer!  “It was a very exciting time for me,” James remarks “I’d just finished school and all I wanted to do was party - watching in awe as Carl Cox worked three decks and Darren Emerson concocted techno melodies,... it motivated me to hone my skills!” 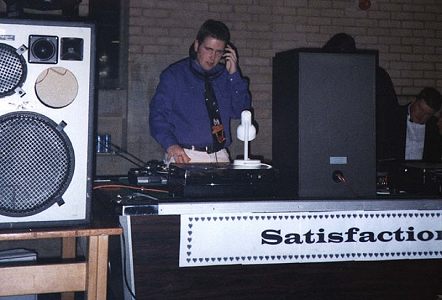 At University James got his first taste of the big time, relatively speaking of course!  When seniors at his halls asked freshers for talent, James promptly popped his head round the door and offered his skills.  Within months of finding his passion, James was able to play to a relatively unknown crowd for the first time; it was thrilling, and although the crowd was not particularly big, or interested in hearing just dance music, James received a huge round of applause!  Following this, James played at a series of private and public parties organised by Rob Draper, a friend he met in the first year of university.  Nights such as Satisfaction and Paddy’s House were great successes.  However by the time the second year was up, what with concentrating on his Computer Science degree and other social engagements, James had become lazy in his efforts to push his talent; there was no regularity to the gigs he was playing.  James’s record collection continued to grow strong however, as did his appreciation for the music he was collecting.  By this time he was also the proud owner of a very tasty pair of Technics SL-1210MK2s (the de facto standard in clubs back then) and the Gemini PS-626Pro mixer, sporting a variety of knobs - it wasn’t long before James Weston’s style was realised, steering away from the popular dance tracks and discovering his own particular blend of House Music.  The third year brought little extra exposure, and concentrated more in what James was looking for, the chance to play to people that were there for the music, the mix, and the atmosphere it created.  A mix-tape placed James Weston in his first DJ competition at the Redfern Students’ Union bar, University of Leicester.  James won second place in his heat but impressed Paul Hyde, promoter & DJ, enough that he was asked to play for a new week-night event called Glamour Puss on the University campus.  This was where James’s talent really began to shine through (he played solo and back-to-back sessions in the team), and the club night peaked when people were dancing on tables and chairs by the end of one night!  “It was such a buzz,” pipes James “it confirmed my belief that people exist, like me, who love listening and dancing to House music.”  In fact, it wasn’t uncommon for James himself to go and dance in the crowd in between records.  James Weston’s talent was recognised and his much-loved time at Glamour Puss sparked more one-off appearances around the multi-venue campus.  This was James’s final year of Uni, remember, and he knew his time in Leicester would be limited as he’d not crossed the boundary out-side of campus.

James returned to Aylesbury, Buckinghamshire, in 1999 having finished his course to rejoin old school friends and secure a full-time job in his second passion, the Internet - it helped to build this website!  Armed with boxes of records, he spent the next couple of years building his knowledge and understanding of how the dance music scene began and progressed, along with his great respect and appreciation for the pioneers of House music. 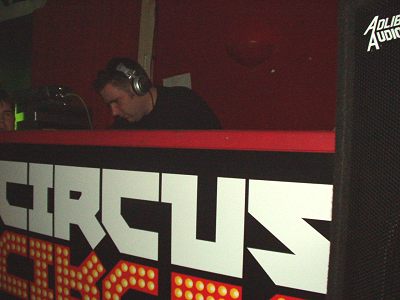 Now in the present, James’s love firmly lies in the music and the pure enjoyment of uniquely sharing it as a disc jockey.  A few competitions and gigs in and around Aylesbury passed, he’s enjoyed a residency at the popular Delish funky House night, funnily enough, back up in the centre of Leicester (see James Weston’s gigs in 2003 for more info).  The most recent competition that James Weston won took him all the way to Liverpool where Yousef and the Circus party-goers showed him just what real life is like behind the decks of a House-loving crowd.  “It was amazing - a dream come true!”

In 2003, an old Uni housemate who co-founded faceparty.com asked James to warm up for their star-studded Festival of Dreams. It would seem James was attracting some attention as in 2004, FM station RadioPluss in Norway requested a House mix to be broadcast on their show to break up their usual trance theme - thank goodness for budging the Judge! In 2005, James’ highlight was warming up for Lottie at Slide and then in 2006 it was representing Simple on Ministry of Sound Radio. Since then James’s residency at Simple has seen him DJ alongside a string of big names including Audio Bullys, Kissy Sell Out, Annie Mac, Tom Middleton and Erol Alkan to name a few.

As to exactly what you can expect from one of James’ DJ sets will vary depending on what time of night you catch him. If you were to pigeon-hole him, his House selection is jackin’, fidgety and techy, complete with some of those fashionable squelchy sounds. However, expect the unexpected at Simple - he’s been known to drop some Drum & Bass before now! And don’t be surprised if you find James jacking on the dancefloor beside you!

This biog, soon to be rewritten and updated!

Check out the new stuff for starters, especially the upcoming gigs, or perhaps you can’t wait and want to download mixes now?